CULTURAL BORDERLAND OF POLAND AND UKRAINE

Western Ukraine is the area inhabited by many ethnic and ethnographic groups (nationalities). Among ethnic groups should be mentioned: Ukrainians, Poles, Belarusians, Russians and Jews, while among the ethnographic groups must be mentioned: Boykos, Lemky and Huculy. By the term "ethnographic group", should be understood a group of people inhabiting a specific geographical area, group that stands out among the surrounding population swoistymi cultural characteristics and have the awareness of belonging to their group through a perceived cultural distinctiveness. 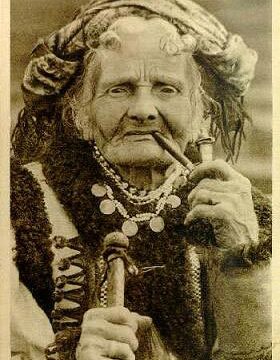 Boyko – ethnic group of Ukrainian highlanders of mixed origins-Ruthenian Wallachia, who settled in the Eastern Carpathians. Historical and ethnographic inhabit an area called "Bojkowszczyzną", Situated on the northern and southern slopes of the Ukrainian Carpathians. Language Boykos is one of the Rusyn language dialects and belongs to the East Slavonic languages. Ranged greatly influenced by the language of Old Church Slavonic.

Boykos are a group of ethnic highlanders of the Ukrainian-Ruthenian of mixed origins of Wallachia, osiadłą in the Carpathian Mountains of Eastern. Historical and ethnographic inhabit an area called "Bojkowszczyzną", Situated on the northern and southern slopes of the Carpathians. Its area is 8 k. km ². Administratively is situated in the mountainous parts of the Lviv Oblast, Ivano-Frankivsk and Transcarpathian. In Poland, "Bojkowszcyzna" covers the south-eastern patch of Podkarpackie. In the west, adjacent to Łemkami, and east of Hucułami. For some scientists are among the "karpatoruskiego" nation, who undergoes Ukrainianization and now identifies with the Ukrainian people. Not until the end of it is explained the origin of the name Boiko. The first known record of the name comes from Boyko 1607 year, then appears in the nineteenth century in the work of Vincent Fields. Some associated it with the name of the Celtic tribe Boii (Bojów). Another version is derived from the name of her oxen and salt traders. Words “Boyko” name formerly used to describe stubborn ox. Hence the nickname "Boyko" was to be used as a synonym for backward and primitive human. In the second half of the nineteenth century under the influence of literature, the name has become widely, going process of evolution of nicknames for the name of the official. Boykos themselves often call themselves "Hyrniakami" or "Werhowyńcami". Language Boykos is one of the Rusyn language dialects and belongs to the East Slavonic languages. Ranged greatly influenced by the language of Old Church Slavonic, and languages: Polish, Slovak, Hungarian and Romanian. In terms of religious Boykos mostly belong to the Greek-Catholic Church, less to the Roman Catholic and Orthodox.

Huculy – Ruthenian ethnic group-Wallachian origin. Huzuls differently from Boykos are still distinct sense of self-Rusyn. An example of self-determination of the population may be Hutsul establishment of the Republic of Hutsul. live in the Ukrainian and Romanian part of the Eastern Carpathians, namely Gorgany, Czarnohorę, Świdowiec, Karpaty Marmaroskie, Poloniny Hryniawskie and Beskydy Pokucko-Bukowinski. Besides Boykos, which are adjacent to the west, in Łemków, this is one of the three major groups of Ruthenian highlanders living in the eastern part of the Carpathian arc.

Huculy, Boykos are like-Ruthenian ethnic group Wallachian origin, but differently from Boykos are still distinct sense of self-Rusyn. An example of self-determination of the population may be Hutsul establishment of the Republic of Hutsul. It was ephemeral state, created by the National Council Hutsul 9 January 1919 year. After the fall was connected to the West Ukrainian People's Republic, and then in July 1919 year to Romania.

Huzuls inhabit part of the Ukrainian and Romanian Eastern Carpathians, namely Gorgany, Czarnohorę, Świdowiec, Karpaty Marmaroskie, Poloniny Hryniawskie and Beskydy Pokucko-Bukowinski. Besides Boykos, which are adjacent to the west, in Łemków, this is one of the three major groups of Ruthenian highlanders living in the eastern part of the Carpathian arc. In Ukraine inhabit vast areas of circuits: zakarpackiego, Lviv,, Ivano-Frankivsk and Chernivtsi. In Poland, Hutsulshchyna covers the south-eastern sections Podkarpackie.

The history of the settlers back to Neolithic times Hucul. Since the ninth century wołoscy shepherds and their families and herds of sheep and goats, they moved along the arc of the Carpathian mountains in search of pasture. Orthodox religious community of the two groups led to the "merger" and produce a dialect based on the Ruthenian language with an admixture of the Romanian.

Huzuls created away from the trade routes, roads and major cities, original regional culture in the upper basin of the Prut, White and Black Cheremosh and Tisza. Their traditional occupation is cattle rearing, herding and hunting. They were also horse breeding, among others grew very strong and beautiful horses Hutsul. Traditionally, religion was Orthodox Huculs, but after the Union of Brest in 1598 years slowly passed on grekokatolicyzm. 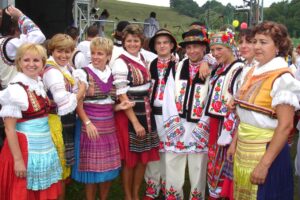 Lemkos – wschodniosłowiańska, Ruthenian ethnic group, living in an area called Łemkowszczyzną, which is located within the historic region of Galicia, Transcarpathia and Northern Slovakia. Ethnic Group, which was most affected by the deportation of the population in the postwar period.

Lemkos belong to the East-, Rusyn ethnic group. Inhabit the area known as Łemkowszczyzną, which is located within the historic region of Galicia, Transcarpathia and Northern Slovakia (mainly Country Preschau). The origin of this ethnic group raises a lot of controversy among scientists. Some believe, that the emergence of this group is associated with the migration of the population at the turn of Wallachian XIII and XIV century, inside, that the area of ​​the Carpathians was continuously inhabited by Slavic peoples, namely, the White Croats. The theory of the origin of white-Croatian is one of the cornerstones of the ideology of the nations karpatorusińskich. There is also a theory of the west-contact cultures (rzymskokatolickich) culture wschodniosłowiańską (Rusińską, Orthodox). Surely there have to fusion of cultural elements, groups mingled with each other, of which may provide a common language elements, For example, the terminology associated with pastoralism, and material culture.

Traditionally Lemkos profess Orthodoxy and Orthodox belong to the Eparchy of Przemysl, but after the adoption by the bishops of Przemysl in the seventeenth century Orthodox Union of Brest of the area turned into a Greek Catholic church. This state of affairs continues to this day, and the Holy See, to emphasize the independence of the population and reverse the process Lemko conversion to Orthodoxy, Decree 10 February 1934 Quo year aptius consuleret Lemkos created specially for a separate unit of jurisdiction - the Apostolic Administration Lemkivshchyna.

Lemkos are an ethnic group, which was most affected by the deportation of the population in the postwar period. After the accusation of supporting the population Lemko guerrilla movements UPA, Polish authorities have carried out a deportation Campaign "Vistula". As a result, were resettled from virtually the entire population of Łemkowszczyzny łemkowską. The incarcerated population in the Recovered Territories, and also in the framework of an exchange of populations, resettlement areas were made in Western Ukraine and into the USSR. As a result of these processes into smaller population groups smashed łemkowska watra was gradually polonizowana and ukrainizowana.

Other ethnic groups inhabiting the Eastern Galicia – Eastern Galicia was inhabited for centuries by Jews. World War II, resulted in the extermination of the Jewish population in numerous concentration camps. In a similar manner have also been made for the destruction of Roma minorities.

Area of ​​eastern Galicia was inhabited for centuries by Jews. As an example, the size of Jewish communities in the nineteenth and twentieth centuries can be used in the Great Synagogue Choir Drohobych sometimes called. was built between 1842-1865, for the needs of the local Orthodox clusters. This colossal, nowadays abandoned temple, is one of the largest synagogues in Eastern Europe and the largest synagogue in Eastern Galicia. According to the Census Bureau carried out in the Austro-Hungarian Empire, Jewish population in Drohobych in year 1880 accounted for approximately 50% of the total population and play a major role in economic. A similar situation occurred in Belz, which was famous as an important center of Hasidic, having its own dynasty tzaddikim. This dynasty, according to the sources of the population that practices headed Judaism in Eastern Galicia. According to the statistics, The Jewish population in 1880 year was 2135 people, which constituted 51,7% of total population. In 1910 it was already adequately 3625 people (60,2%). A similar situation was in the Polish parts of Galicia, example was the city where Leżajsk, where he lived a Jewish rabbi known, who was one of the first tzaddikim and one of the most prominent representatives of the Hasidic world. His grave is a pilgrimage destination of many Jews.

World War II, resulted in the extermination of the Jewish population in numerous concentration camps (including Sobibor, Auschwitz-Birkenau, Treblinka, Majdanek, Belzec and Chełm). Many Jews were killed directly in the Jewish ghettos and the executions carried out in places of residence. It is estimated, that the number of Jewish victims in World War II was about 6 million. people. In a similar manner have also been made for the destruction of Roma minorities (gypsy).

In modern times, on the Polish-Ukrainian borderland Jewish communities are few. Many families have emigrated to Israel, U.S. and settled there permanently. According to the census in 2001 year Jewish nationality declares around 92 k. Ukrainian citizens, which gives 0,3% total population of the state. It is difficult to estimate the number of Jewish people living in the Polish-Ukrainian.

Since the beginning of the constituent republics of the USSR authorities pursued an internationalization of the country. As a result, a number of artificial, unnatural community. Such activities are carried out to blur the sense of national independence in the Soviet republics. The central authorities have recognized, that the best way to mix and create a unique community of the Soviet people, are forced, focused on the deportation and resettlement of separatism. Such "treatments" were often carried out in the Ukrainian Soviet Socialist Republic. As examples may serve Tatar population resettlement, living in the Crimea Peninsula into Central Asia, and resettlement of the population of West-Ukrainian (Boykos, Łemków, Hutsuls and other inhabitants of Galicia and Volhynia), accused of collaborating with separatist organizations and the OUN UPA, the area of ​​Donbass (Donets Basin), Central Asia (Kazakhstan, Uzbekistan) and in Siberia (Russia). To preserve the balance of population, Placement of persons deported, population was imported from Ukraine and the Central European part of Russia. The central authorities encourage the migration of people and fostered a new "rooted in".

Governments of member states of the Warsaw Pact led a similar policy, thus promoting the formation of ethnically artificial borders. In this way, the western border of the USSR has been partially converted, and the population of this area are frequently mixed.

Thank You for your website, ktöra deals with the themes of the, about new in everyday life , very little is oddzwieku , and röwniez and knowledge of them. In connection with writing my book on the Carpathian, I'm busy working “dedektywa”, ktöry is looking for in terms of the concept of, content and infpormacji on the questions and issues.
very zainteresowala history praslowianskich ludöw , ethnic groups which are ;Lemks Settled In , Boyko, and naröd Hoculi.
These groups are fantastic little known history and wspölczesnoci in Europe.
powiecem groups with one chapter in my Travelguide.
Whether these ans national group, associations , the new report you can , the purpose of the interview on their origin.
If You have such addresses?.I was grateful to you , for their delivery!
Best regards from Düsseldorf and wish you further. pomysnych days, at the reception of information about Ukarinie and Poland.
Kornelia Golombek

Not spoken Hutsuly, only Hucułowie. After that, everything was great. I'll be here often peeped.