Informally, Turka is the capital and heart of the Boykivska Land - Boykivshchyny. This small county town on the river Stryy, located among the scenic mountains near the national and landscape parks, is the target of numerous excursion of youth on the nature. An interesting fact is held here every five years - Festival of Boykivska Culture. Turka is a picturesque town, ethnographic area, that is worth visiting while travelling through Ukrainian Carpathians ! We encourage you to travel !!! 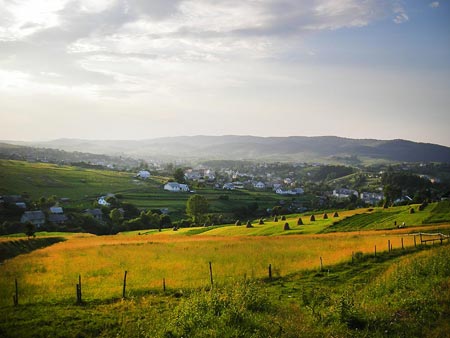 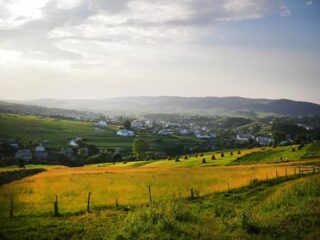 Etymologically the name "Turka", has nothing to do with the "Turks". The name derives from "Arochs" (ukr. Tур), wild bulls / bawołów, who lived in nearby forests ! As we know from Boykos were famous of breeding bulls, race which truly cherished and cultivated !

HERB TUREK in the sixteenth century

Turka is a small county town, located in the Carpathian Mountains on the river's Stryy, is the most important unit of administration in this sparsely populated area of ​​Lviv region. Pass this way an important transport routes: rail and road, which, through the Uzhocka Pass unites Galicia with Transcarpathia !

The city's history dates back to the ninth century, to the days when Turka was a small settlement, in which the garrison was to protect the Ruth trade route passing through the Carpathians ! In the literature, the first time in documents Turka cautioned in the fourteenth century, when Lev Halycky joined the lands of the Transcarpathian to Ruth Galicia-Vladimir. The town had many owners, For centuries they have often changed, as evidenced by different types of documents, which were held by royal families, priests and monks. In the eighteenth century to the Turka arrived the first few Jewish families, which began their influx in the next years ! About the size of the Jewish community the size of synagogue the Jewish cemetery in Turka provide approximation, which are now in ruins. 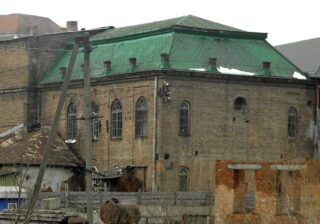 In those days (2-3 days) respecting their culture Boykos, come to Turka, to celebrate their distinct "Boyko" culture ! The festival involves people of different ages, young and old, wealthy and the poor ... the most important is the shared fun ! 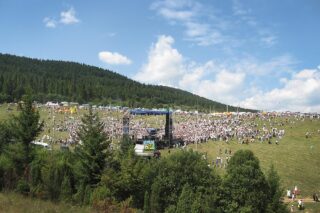 There on the stage of amateur and professional collectives, that are dressed up to their national cloth. Play, sing, dance boyko motives and organize various types of games ! The next festival will take place in summer 2012 year !!! You should then come and enjoy !

The town lies on a major transport route, which was created during the reign of the Austro-Hungarian. Military, a strategic railway route, combined capital of Galicia - Lviv, with Budapest and Vienna ! The railway runs a winding trail through overpasses, tunnels and bridges. For lovers of the rail trail trip transportation, will be an unforgettable fun !!!

In addition to rail, efficiently functioning road transport. Auto-buses and buses regularly go there from various towns of the region:

The road through Turka is the shortest route connecting Poland with Ukrainian Transcarpathia ! You can travel to Hungary, Romania and Slovakia, by crossing the border crossing points in the Zakarpatia region !

It is worth checking whether scheduled changes in schedules.

Turka is a picturesque town, Capital of Boykos Land, ethnographic area, that is worth visiting while travelling through Ukrainian Carpathians ! We encourage you to travel and look forward to your comments and suggestions !

Thank you on behalf of our Creative Collective !! We try to associate with each other people, are interested in traveling to Ukraine !

Hello
Well ,that created this site ,where you can find information about Turce.Moja family lived in Turka over 400 years, My grandfather was in the period between the war senator from that ground – Wladyslaw Pulnarowicz

Hello!
I am glad, that the site is helpful! You may have some interesting information, grandfather tales, etc. a Turkey? I Think, that it would be nice to add, tymbardziej, Your family that has long historical roots!
If you have not read, Anna Krzosek it deployed its article on the Maidan : https://www.nieznanaukraina.pl/1343/majdan-ziemia-przodkow/
Pozdrawawiam

Hello! What an interesting You can add the Turce, his father may have talked. as a wygłądało for the youth?

In fact, it does not know where the father lived Turce,as a child jeździliśmy on vacation to her dad that she lived in Jaworze ( 6 from Turki ), He lived there his brother.The city must go only to sign in with Passport on the militia.Last time I was with her father in Turce in 1988 layingdown, and in 1989 He died.Only after the 22 from vacations to Jawory to my cousin, and cousin, who still live there.

I am looking for someone who can tell me exactly where my great grandfather was from, Galicia was mentioned to me by some relatives. His name was Paul Sovich. My other great-grandfather was John Orowski.

Dear Stef! We will hope someone who knew your relatives will write you here. What information do you have about them?

My great grandfather, Paul Sovich, had a nephew by the name of Fedok Michailo (sp?). Paul apparently was from the Turkovsky Village, Upper Gusne, Lvov area… I am not certain where that all is exactly. I know that a relative of Fedok’s, her name is Yaroslava Kikot.

I was this year on bojkowskich county fairs,This Decree 196/03 2 days in Turce and one day(Sunday) in Sycamore… was great so many people,super atmosphere and super music only the worst is that I lost my disc and i can not remember the sobi what teams were playing…. I would recommend this party for 5 years… super really…. greet

Again Hello.
I remind you that I am the grandson of Vladislav Pulnarowicza Senator RP with Turki. If someone I am interested in information about Turki in the interwar period ,It can be read in the Yearbook “Bieszczad” No 17 ,where are the memories of Zofia Chołoniewskiej .
I've included the link: http://www.tonzbieszczadzki.pl/bieszczad_17.htm
My grandparents lived in Kościuszko Turce ul 17 near the Church Catholic in the Government. “clearing” .Now near this place/dom longer exists/jest precinct militia.The back of the station is devastated, and in this place pitch was home and garden Pulnarowiczów. many interesting photos of Turki is contained in/diary .

Hello. I have a photo of the 1931 year. He writes on the back- School boys in Kolonja Turce n/Str. Year 1931 August.
Children with the teachers at the school are probably doing some photo. If indeed they were in the area held some colonies? But maybe ill I feel the name of, the municipality, the County. Can someone confirm on the basis of that description, that it comes to this here Turce ? This is for me a riddle unsolved for over 30 years, but still, I will look for something about this, that probably is in this photo.

grazi; send this photo to my email choloniewski@poczta.onet.pl can you help

Ktosz has Info where Turkish with Turk lived ?

Dear, I found the trail of this page, in preparation for meeting the family descendants of the 6th cousin from Turki. I am the granddaughter of a teacher with Turki Helena Nowosad and her daughter Mary. Lived in Turce along Haller. My mother Mary has already completed 90 years and still – quite a good memory. Of her generation have remained with us two younger cousins, we have – Wiesia and Danusia. I'm pretty sure, that the name Pulnarowicz appeared in our conversations. Along with my two kuzynkami I was in summer Turce 2011 or 2012.

Bacon. Dreaming me the sloninke with pickled or with onions on
kromce bread. But seriously,There is a possibility
by the post office to send Polish?not and they will take or not dies along the way? In February I will be in Poland podalbym adress,naturally first
send money to the supplied address/account/I'm ready a chance. Can you help solve this problem?

Interesting information. I am working on a family tree of the Turczańskie mountains, well, I for information, my name is most likely derived from this city. In the documents of the scroll also places such as Torrent, Buchach and Uncle. Very I would like to visit these places and poke around in the church books. I greet all cordially.

I am looking for information about his grandfather, Turki who fled because of the specter of death, leaving there a Ukrainian wife and daughter. Can someone help me there on the spot?