History of Polish-Ukrainian border - bringing closer reflections on the genesis, history and geography of the boundary line separating the Polish Republic and Ukraine. Polish-Ukrainian border, "artificially separates the" homogeneous area, which has a strong internal ties: economic, cultural, linguistic, ethnographic, historical and religious. Border , which split families and emotional ties of people living in these areas for centuries. 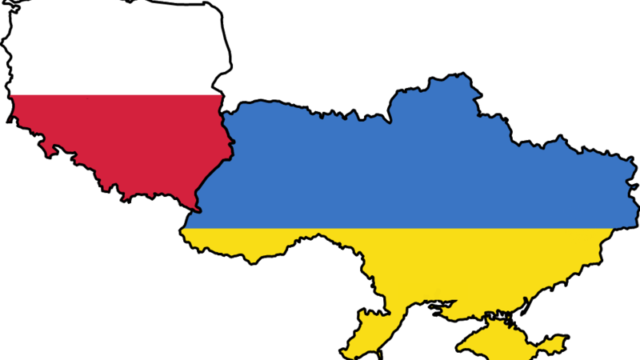 "The term „granica państwowa” to be understood the vertical plane passing through the boundary line, separating the territory of the Polish state from other states and territories from the high seas. The state border also separates the air space, water and the interior of the earth " (Act of 12 October 1990 on the protection of state border).

The length of the border between Poland and Ukraine

Length of state border between the Polish and Ukraine is 535 km. It passes along the provinces of Lublin (296 km) and Podkarpackie (239 km), which share borders with Volyn circuits, Lviv and zakarpackim.

On two odcinakach San River (ukr. Xiang) and Bug (ukr. Western Bug), belonging to the Baltic Sea catchment, form the border between Poland and Ukraine. San River forms its upper reaches in 55 km border belt, starting from the slopes Piniaszkowego (950 mnpm) in the Western Bieszczady meanders around the great circle Smolnik Łysani on the San. Bug River has its source in a village near Zlotshev Werchobuż Upland Podolska Ukraine. In the section 363 km (Pigeons - Niemirow) forms the border with Ukraine and Belarus.

State border, separating areas of Polish Republic and Ukraine is routed through areas, which in the past, not once were considered questioned.

As a result of wars, partitions and other types of interstate conflict boundaries were changed, and even eliminated. This area in the past was a borderland of different peoples and cultures.

Changes to the Polish border and Ukraine

The present course of the border between the Republic of Polish and Ukraine is the result of a series of international treaties and agreements, made in the past between the Polish Republic and the Union of Soviet Socialist Republics.

The biggest adjustment of borders in postwar Europe

Writing on the border between the Polish and Ukraine, You can not ignore the fact, which concerned an agreement to change the borders between the USSR and the Polish Republic. It was one of the largest border adjustments in post-war Europe. Correction of an area of ​​concern 480 km ².

Day 15 February 1951 in Moscow, President Boleslaw Bierut Polish Republic signed an agreement between the Polish Republic and the Union of Soviet Socialist Republics to replace sections of the state territories. The agreement to amend the limits was ratified in accordance with the Law of 26 May 1951 year (Acts. U. R. P. No. 31, Item. 242).

On the basis of the USSR passed the administrative portion of the perimeter of the volunteer (Currently, Lviv), which belonged to the Ukrainian Soviet Socialist Republic.

The composition of this fragment belonged: The lower town and the villages Ustrzyki National Bandrów, Brainy, Black, Krościenko, Liskowate and Lutowiska and the surrounding areas.

After 1951 there was no more changes or adjustments to the border between the Polish People's Republic and the USSR.

In 1991 year after the collapse of the USSR and the withdrawal of all Soviet republics of the Union, border has been cut into smaller sections, adequately established the boundaries of: Russian Federation (Kaliningrad 210km), Lithuania (102,4km), The Republic Of Belarus (407,5km) and Ukraine (535km).

After the Polish accession to the European Union and the ratification of the Schengen, Polish eastern border of the state is the external land border of the EU Member States and Schengen.

The issue of "borderline" and "border zone" between the Polish and Ukraine ,has long been the subject of interest of many scientists, among other historians, political scientists, economists, etnografów, linguists and geographers. Directly from the overseas, border areas are related to Polish and Ukrainian. They form a homogeneous region with strong internal ties: economic, cultural, language, etnograficznymi, historical and religious.

As they were added to the map showing the border changes a lot better that it looked like. Nevertheless, blankets and towels were provided, that you write about Ukraine only seems to me , that is not zagłębiacie like it very , could it be undue ostrozność??. Writing about the common Polish history – Ukrainian need to do it with caution.

Mark, If you have similar maps we will place. Good idea.
Mostly nieznanaukraina is aimed at improving the knowledge about Ukraine.

Hello. You can not have such information on the Slovak-Ukrainian border?