Hryvnia (ukr. Гривня), is the official currency of Ukraine. She went into circulation in 1996 year, zastepując „karbowańca” (ukr. Ruble). Its name comes from medieval silver measurement - "fine". At the annual meeting of the committee on aesthetics IMF 2008 year, The Ukrainian hryvnia has been recognized as the most beautiful currency in the world. Then the experts evaluated approximately 50 Top of the World Currency. The second took place during the competition - Australian Dollar, while a third - the euro. Symbol of the hryvnia is cirilic, Double crossed, kursywna letter "г" - ₴. 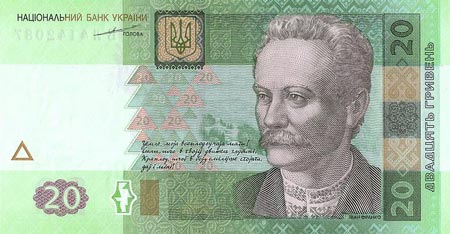 Hryvnia (ukr. Гривня) has a code rate according to ISO 4217: UAH (Ukrainian abbreviation: UAH). Symbol of the hryvnia in Unicode: B4 U 20 – is cirilic, kursywna przekreślona podwójnie letter "г" – ₴.

The Ukrainian currency has both bills, and coins (coin) - A Ukrainian hryvnia is equal to one hundred kopijkam (ukr. Kopek). National Bank of Ukraine issues:

Hryvnia came into circulation in 1996 year in connection with economic reforms. The notes were changed twice / upgraded, the quality and aesthetic.

In circulation there are five designs of banknotes:

Until 1 January 2010 year cycle emissions are only 2003-2006 and emissions from 2006 year. Other pankonty have expired and are gradually removed from circulation. 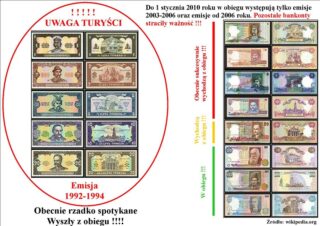 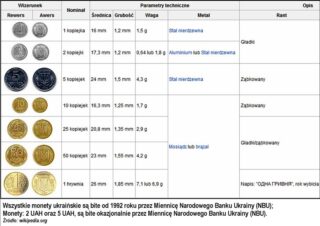 An interesting fact is the presence of Masonic symbolism on the banknote 500 UAH. Bears'The eye of providence / the all eye” (ukr. Vsevidyache Eye), symbol of the eye surrounded by rays of light, enclosed in a triangle. A similar pyramid with the Eye of Providence is on the reverse of the banknote 1 U.S. dollar (USD). The eye symbolizes God's guarding people. 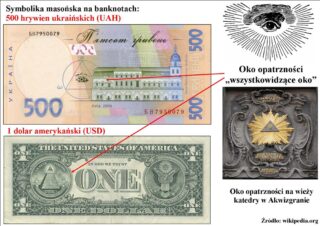 W ikonografii masońskiej - "Around", represents God, and also is a reminder, that the activities of Masons are always observed by God, which is presented as Freemasonry - Great Architect of the Universe.

Hello, I have my grandfather's savings bank book (a citizen of the SOVIET UNION) from Lviv bank founded in October 1991 y. From what I can see on the currency this booklet Russian ruble. How would the conversion of the current Ukrainian currency ruble. Do you know what is the situation in the Ukrainian banks savings recovery by Polish citizens, If I wanted to try for these measures? Thank you and best regards

Marzena Hi! Are periodic payments, and payout periods unknown, because e.g.. last year already (before the elections) She was paid a portion of the savings, 1000 hryvnia, in terms of 1 until 1. Previously payments were a few years ago.

So my guess, that the next payment of this is some sort of election in Ukraine.

The procedure looks like a little complicated for the foreigner, because, you need to subscribe at just the right time for such payment, and a few times to visit the appropriate service of the Bank, and opdowiedni bank is determined depending on where a person lived.

I like to help and try to mediate in this case, but rather grumpy process, tymbardziej, as far as I know, at this point, there is no payout.

Thank you for your reply. Can you tell where I could ask for help in order to recover the money. Or can you recommend a lawyer/law firm which specializes in similar cases in Ukraine. whether you know someone who tried to retrieve the money in this way and it worked? Best regards

Marzena, at this point, it's hard to advise you something, so I know these people, but are citizens of Ukraine, and on-the-spot live here, as I said previously, there are periodic payments, Once a very rare time (rather, it looks like to me as the pre-electoral promotion). I think that you need to look for a lawyer in Lviv, because the book is from there.