The third and last part of the relation from the trip to the Crimea, held in August 2010 y. Read about how we went from Sudak in the direction of Sevastopol and Balaclava through Alushta and Simferopol. A story with pictures 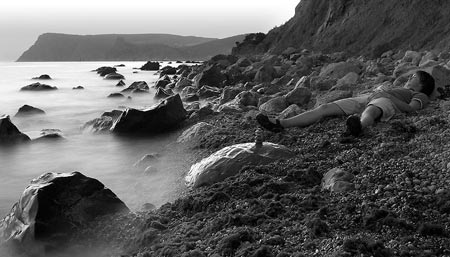 We invite you to the third part of the story about the journey to the Crimea, held in August 2010 y.

In this part we will show the second half of the route traveled.

We leave for Alushta the shuttle bus. Bus rides through the beautiful streamers, but quickly. Beautiful views. Please be prepared to, that it will be difficult for people with motion sickness to ride with comfort.

In Alushta you can see :

From Alushta head to trolejbusową line Simferopol. We did not arrive to Simferopol, we have in plans to visit the Mramorna cave. Unfortunately, access to the caves was banned, because of the protection of forests against fire. As well as access to the campsite, So at night we had to find where to sleep, fortunately managed to spend the night in the yard behind the shop, with the permission of the owners for 10 Hryvnia the person.

We made our way to the trolleybus Simferopol.

Get off next to the train station. From the station you can get to Sevastopol .

You can also be Simferopol.

You can see in Simferopol: 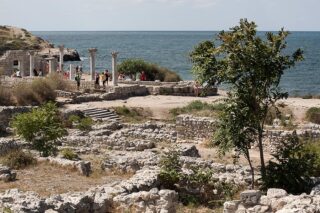 We get to the Sevastopol. At the station we eat, not bad and prices are okay. We are looking for space for luggage, which is at the station. Break is from 14 probably till 15-16. You have to pay for any external thing, eq. foam mattress can also count, as a separate thing, but the price for one thing is of the order 15 hryvnia per day, although of course it is worth paying for a backpack. 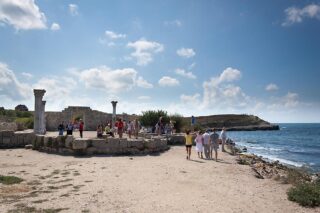 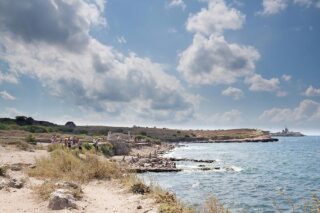 In Sevastopol worth seeing:

From Sevastopol We go to Balaclava, not so long ago, a completely closed military town, now growing resort. Beautiful place, very pure water, super beaches, the choice of two beaches in town (very small) and silver (closer) and golden beaches outside. 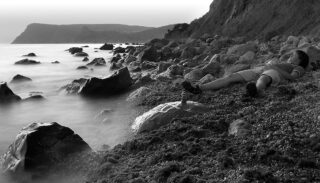 For silver and gold beach, hourly flows big ship, which stops on the two beaches. Also you can swim in the smaller motor boats (a little more expensive). Well worth it to go to the mountains to the beach, but better without the baggage.

In Balaclava you can visit the depot for repair and restoration of underwater submarine ships, an interesting climate in the Middle, completely built under the rock. 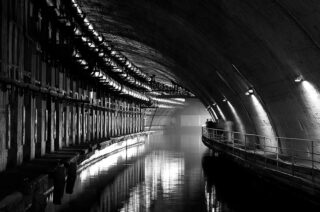 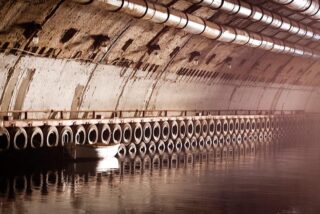 From Balaclava You can go on various trips in the surrounding areas, the choice is really big. 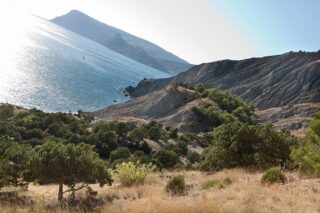 On second far beach (gold) there is tent camp, where they charge 15 hryvnia per night. 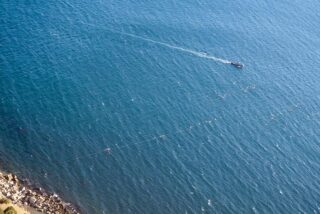 The Balaklava itself worth a visit cape Fiolent, and to the village Inkerman - Wine producer, and former convent, in rock. 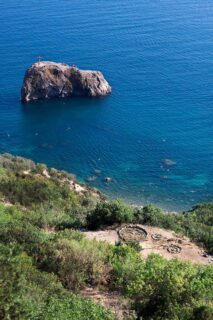 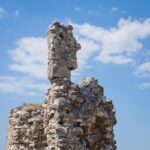 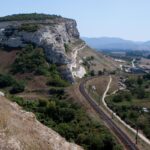 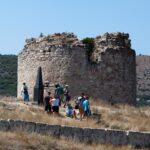 In Balaclava there area lot of places where you can eat. Cheapest is to buy products on the market, or in the shop. Also you can find a canteen with a sufficiently low prices.

Flora and fauna is different than in other parts of Ukraine 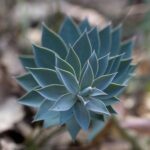 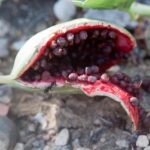 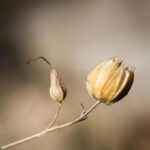 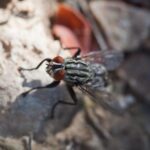 Balaclava becomes our friendly home for a few days.

From Balaclava You can return to Sevastopol, and then to Lviv, or to Simferopol and Lviv.

This is the end of our story!

Please leave your impressions of the relation of this expedition in the comments!

Typo in the problem: “It is thanks to this fortress Alushta
acquired its present name”. Super Photo, especially with the underwater
depo 🙂 Za rok chcę jechać z Wami! Only eat as I had
wolne w pracy 🙂

Thanks! improve. Ration, once very secret and guarded depot has its own climate:) I agree to the following. may still choose this autumn. in the next month-month expedition to the Crimea zrelacjonuję hailed in May of this year (2011).

This year in August, once again, chosen from the family to the Crimea,we plan to visit and rest in Sudak,last year wypoczywalismy in Feodosia,and the sea of ​​Azov in Szczolkino,also recommend,Hot water,you can easily rent a flat and quite cheap,worth to visit the beautiful views, beautiful beaches Tatar. Black Sea is a wonderful.
I recommend also rest in the Carpathian mountains in Truskavets,picturesque and beautiful surroundings.
greet

Anne, I see that a lot of traveling to Ukraine:) You're absolutely right Carpathians of Ukraine are beautiful, and Truskavets and Drohobych and other smaller towns, soon will be an article about Drohobych. Azov Sea, completely different from the Black, should be there and there. Feel free to share your own experiences when traveling to Ukraine, gladly we will post interesting stories, and readers will be grateful for information useful. Particularly interesting are the voyages of the sea of ​​Azov to the write. Yours sincerely

Crimean dorzuciłabym travels to the Iberian Peninsula more. Kerch and volcanoes of mud (but this is rather for zmotorywzowanych), mandatory Czufut-Kale (These views!), on the occasion of the Bağçasaray, Ai-Petri and beautiful Vorontsov's Palace in Alupka.
http://www.eryniawtrasie.eu

Crimea is beautiful, These sites worth a visit. I was also a bit of a different journey around the Crimea, but it has not yet started to describe. Luke also described their own a trip to the Crimea in October
By okzaji did you manage to collect cool catalog your own trip on your blog, all I encourage you to visit. Best regards

Thank you for the compliments, and i look forward to another trip descriptions, especially that slowly begin to yearn for Krymem – wino się kończy 😉