TRIP TO THE SOUTH COAST OF CRIMEA : August : Cz. 2: Journey

We invite you to the second part of the story about the journey to the Crimea, held in August 2010 y. The route of our trip is up to date and for the summer 2013 year. Read about the route we traveled, what to see along the way, and some captured images of landscapes through which the journey passes. In this part we will tell about the first part of the journey, from arrival to the Crimea, directions to Theodosia, residence in Ordzhonikidze, road to Koktebel through mountains, and stay in Sudak and the Novy Svit. 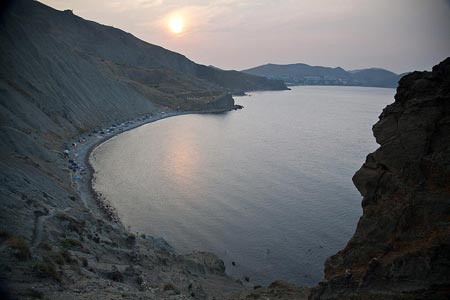 We invite you to the second part of the story about the journey to the Crimea, held in August 2010.

In this section we will show half of the traveled route.

Our journey starts in Lviv. I guess everyone has heard about it, Those, that were not there have to travel to Lviv, which has its own unique climate, and is becoming more friendly for tourists.

With everything necessary we sit go a train at Lviv Railway Station, is close 9 in the morning. Ahead of us is a long way, only about 9 the next day we will be in the Crimea in Dzhankoy. There's a train in the afternoon (operates only in summer), but in August it is rather a very warm, and the train can be very hot, happens, that windows can not be opened. So better to leave in the morning. Although it is not always possible arrival before 9 to Lviv. The train goes through a few major cities with different stopping times, so on train stations you can buy something, for eq. to eat.

We splited into two groups: Those, that earlier were able to go and those, who couldn't.

The first group went from Dzhankoy by train to Kerch and has been there for 2 days.

We belonged to the second group, because we could go from Lviv later. Our plan is to trip from Dzhankoy until Feodosiya by bus.

We came to Dzhankoy and not reaching the bus station (which is right next to the train station) We met some locals offering journey, for "cheap" (relatively high prices), give up and go to the bus station checkout, where for half the price of the proposed earlier, for 40 hryvni we buy tickets for the bus to Dżankoj - Feodosiya – Kerch. In Feodosiya meet with the rest of the Group.

It is around 120 km. About two hours on the road and we are on the spot. The bus was comfortable, a cheerful driver, has turned on a concert on TV. 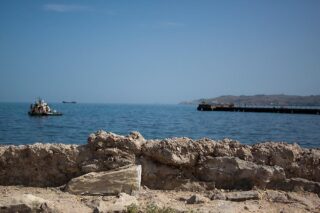 We arrived at the place, to Feodosiya. Things we leave in the Coca-Cola bottling plant bus station. Close to the beach, so in the end we can cool out in hot water;) . Also walk along the beach, it is beautifully!

As you can see Feodosiya:

In 1346 year, during the siege by the Tatars – plague was used for the first time - as a biological weapon !!! Besieging catapults through the walls of the city threw the dead bodies of the disease, and refugees from the city spread the epidemic on the continent – thus ushering the plague in Europe!!!

Feodosiya is the only city in the Crimea, which uses the ancient name today, meaning literally "from the gods given" and is one of the two cities in the world, where is the Hang Gliding and Paragliding Museum ! The second is in Harris Hill, USA !

After several hours, we meet with the rest of the group. We eat dinner at the bar next to the train and we go get to another bus station, from which the bus ride to the Ordzhonikidze, which is 20 minutes from Feodosiya. 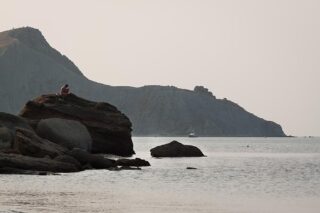 Ordzhonikidze is a small town, in which everyone will find something for everyone. The views are beautiful, and the prices are really low here as for the conditions of the Crimea. You can live in private accommodation, or go with tents 500 meters from the main beach. You have to go a little way after not high mountains or rough coast. We recommend that you leave for an early hour to Ordzhonikidze to find a place for the tent, at dark it is difficult. ( 20 p.m. to travel is a little to late). In bars and shops the prices are slightly higher than on the market, which is far from the main beach near kilometer. You might ask someone where is the "Bazar". Recall, that on the market you can haggle, obviously, if you know the language. 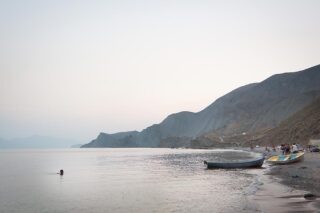 We are staying here for a few days, the weather is beautiful and the water is clean and warm. 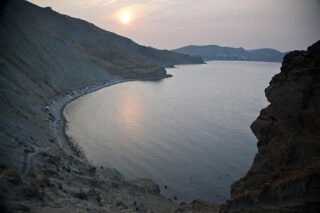 Then we go through the mountains toward the Koktebel. The views are spectacular, but the route is difficult, the path is narrow and made by local, better get going in the morning, because it gets hot quickly. The less baggage the easier. 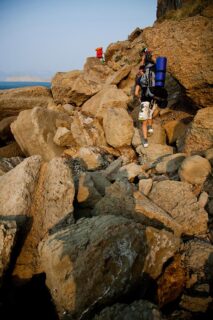 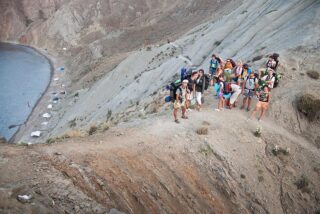 Reaching the next populated beach, there are two routes to choose from:

1) use the services of carriers, who can bring you to the center of Koktebel, you should determine the price before embarking, because we met a few enterprising locals, speaking: "Договоримся", :"we will come to price later", but that does not mean, it would be a good price as you arrive at the place.

2) Go walk about 5-10 km along the road towards Koktebel, and then a few km around the town.

We benefited from both, ie. First we went a few kilometers, and then the bus stopped on the way, which took us to sign Koktebel.

From Koktebel You can go to Sudak from the bus station, ticket cost about 30 hryvnia. The journey takes approximately 2 hours.

Also you can be in Koktebel. In Koktebel there are several interesting places: 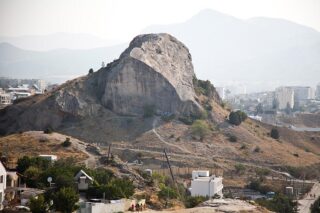 In Sudak you should find where to sleep from the morning immediately after arrival. With setting tents in Sudak can be a problem. You can spend the night outside the city in the side to the Novy Svit. Only remark during hot weather can be declared for protection of forests against fire, thus it is prohibited to set tents in the woods. This region is already a forest area, so either set tents at night and pack tents early 6 in the morning and go to the road, or have an unpleasant discussion with the forestry, combined with the mandate. During this period you can stay without fear near water. In any case setting camp in this area is not simple, and during the period of protection of forests is quite difficult. So you should also consider overnight at the local, or setting tents in their backyard. 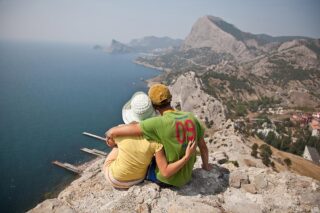 In Sudak worth seeing:

From Sudak we travel to Novy Svit. From Sudak goes bus to Novy Svit. Also you can go on foot, but the road is quite far away. Returning from the Novy Svit sometimes you have to wait in the queue to get on the bus. 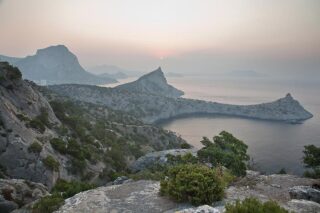 Novy Svit is a very beautiful town. Clean water, sand bottom. Water blue-green color. Well maintained bank, which is under protection, called the "rill of Pirates". It is worth visiting. In Novy Svit it is quite expensive, prices for food in the bars are too high. Near the beach is the canteen, but the food is expensive and not good. But if people rozpytać is an alternative "Soviet" canteen where smaczniej and cheaper. Inside, everything is with old Soviet posters. 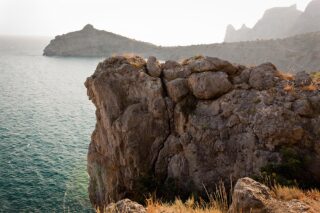 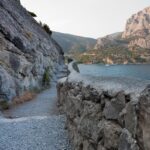 In Novy Svit you should see:

We return to Sudak, yet we stay here for one more day.

And then we move to the road… 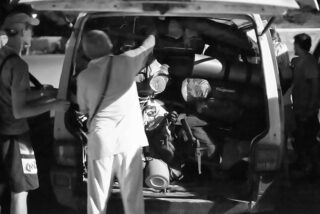 The next part TRIP TO THE SOUTH COAST OF CRIMEA : August : Part 3: Journey Part 2

Please leave your impressions of the relation of this expedition in the comments!

Passing through a very similar route more or less 3 weeks after you. Outside, journey that has passed since a few months I'm still pretty impressed what I saw.
This was the first trip to Crimea, but I'm sure, that did not last.
Next year going for a Euro and I would ask you to describe a few interesting places, that you can visit on the occasion of his visit to Kharkov or Donetsk. Particularly I am interested in Post-Soviet Integrated in this area. I've heard, that none is missing…
P.S. Paramount pics.

It was very interesting to hear about how they looked around for nearly a month after the September. I share the experience! my, personally it was amazing! So now I could repeat the trip in March. As Arthur said about the Euro 2012 We will try to develop, that was helpful. Thank you for your proposal to subject the post-Soviet conglomerates, me too interested in such things, So we will try to develop this topic. Thank you, this year I managed to do more green photographs, because in March it was very green.
P.S. As I wrote above, it would be very interesting to read and see what he looked like Crimea in September, I propose to write a short story and send some pictures, and we will post at home.

Thank you for your comment ! And for his valuable suggestions, for “postsowieckich kombinatów” !!! This may actually be a valuable topic and material for the next articles ! We will try to skreować something on Friday shape !
And as for the EURO 2012, in the near future we intend to vigorously develop the subject – you will certainly find something interesting and worth seeing !
Yours sincerely !

Dzięki za odpowiedź 😉 Postaram się coś napisać. In excess of time, unfortunately, do not complain so probably some time it will take me. I wish a lot of perseverance in creating this extremely interesting site. Greetings!

😉 Nadmiar czasu to rzecz naprawdę rzadka 🙂 Dziękujemy, we will continue to work on site, interesting to discover every piece of Ukraine. Of course they will not do, together with travelers because surely we can make! So I encourage, leisurely, as soon as possible to share a relationship with travel. Yours sincerely!