After the revolutionary invention of the kerosene lamp in 1853 year by the Polish chemist and entrepreneur of Armenian origin Ignatius Lukaszewicz, began to appreciate the benefits, offered by the petroleum. It was the kind of impulse, which gave rise to the oil industry in the area of ​​Galicia then belonging to the Austro-Hungarian Empire. Oil Route, is an international tourist trail which leads through areas of Podkarpackie oil and gas industry in Poland and Ukraine, through the historic region - Galicia. It leads, inter alia, through such towns as: Bóbrka, Jedlicze, Zarszyn, Strachocina, Sanok, Tyrawa Solna, Wielopole, Nyzhankovychi, Khyriv, Staryy Sambir, Sambir, Drohobych, Boryslav, Truskavets and Skhidnycia. 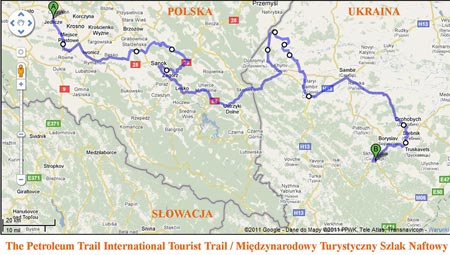 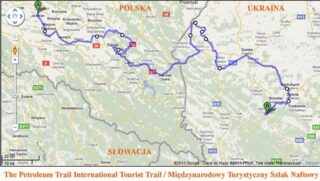 To the unique global engineering facilities located on the trail include: 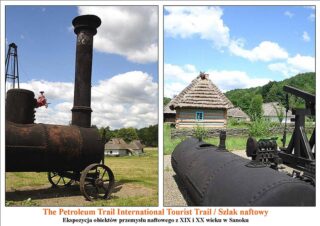 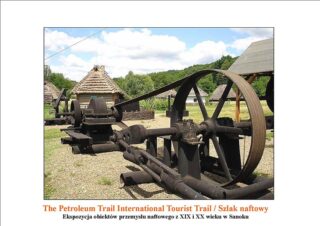 At the time of Polish travel to Ukraine, visiting and following the "tourist trail of oil" (galicyjskim) - We recommend you cross the State Border in Krościenko, in Podkarpackie, Bieszczady County, Ustrzyki Dolne commune:

Road border crossing: Krościenko - Smolnica, open in 2002 year for the international movement of cars, minibuses, trucks and buses with a total mass for 7,5 tons. The border crossing is open day and night.

At the foothills of the External Western Carpathians and Eastern, by fitting the block to the north in the Carpathian, was Foredeep. Its emergence is associated with the last stages of the Carpathians tektogenezy. Carpathian depression is filled with Miocene sediments malasowymi. The Miocene sediments miąższych, in alternating layers of the Commonwealth of Independent sedimentary materials, which for centuries were deposited in this area were formed from the transformed plant and animal debris deposits of oil and natural gas. Later, these layers are covered with various materials of glacial origin.

After the revolutionary invention of the kerosene lamp in 1853 year by the Polish chemist and entrepreneur of Armenian origin Ignatius Lukaszewicz (Jan Józef Ignacy Łukasiewicz, 1822 – 1882), began to appreciate the benefits, offered by the petroleum. It was the kind of impulse, which gave rise to the oil industry in the area of ​​Galicia then belonging to the Austro-Hungarian Empire. 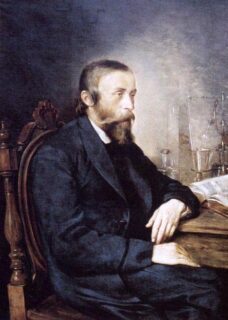 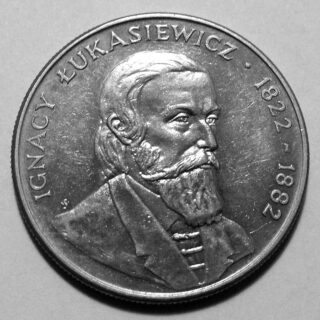 The first mine was established in this area 1854 at the initiative of Ignacy Lukasiewicz in Bóbrka near Krosno. To activate the underdeveloped mountainous areas, commissioned by the rulers of the Austro-Hungarian Empire, was commissioned the construction of Railways transversal Galician.

On the Ukrainian side in Podkarpackie East in the second half of the nineteenth century, launched an intensive exploitation of oil deposits in the vicinity of Borysław, Drohobych, Schidnyci, Sambora and Dobromil. At that time, the Habsburg Empire cared about the development of oil industry, created the technical infrastructure, brought turn.

Boryslav attracted many investors from Europe, because it had a very productive deposits. At the beginning of the twentieth century, with deep wells 900-1000 m mined per day 3 k. tonnes of crude oil. In addition to the area of ​​oil was extracted from natural gas and ozokerite (natural wax), which is a very valuable resource in balneology.

According to statistics the extraction of raw materials, given in October 1992 year, counting from the 1886 year, of oil and gas refining Borysławski extracted Region: 42,8 million tonnes of oil, 261,1 k. tons of condensate and 18,325 billion m3 gas. For years 90. Twentieth century virtually stopped searching for new oil deposits in the eastern sub-Carpathian region. On the day of Borysławski and oil and gas refining Schidnyckiego Region extracted respectively 72,6% and 99,5% oil stocks.

On the Polish side, The situation was analogous, because there was no boundary separating these two areas, which were homogeneous system. Conducted an intensive operation, with the participation of foreign capital. Arose during this time many oil fields and distillation plants. Refinery in Gorlitz, Founded in 1884 year, is one of the oldest refineries in the world.

Dear Sir or Madam:
For a family history, I am looking for any records or documents relating to my great-grandfather David Becher, who was in the oil industry in Boryslav or Drohobych in the mid-19th Century. In family documents, he is listed as “Bergől Besizter,” the owner of some kind of oil deposits.
I am especially interested in any material that can confirm that David Becher traveled to the United States, possibly in the 1860s, to learn the new method of drilling for oil recently introduced in the state of Pennsylvania. Pennsylvania, in and around the town of Titusville, was the first center of the American oil industry. Any details, including news articles, passport or other travel documents, the name of the ship he traveled on to Pennsylvania, the port of embarkation or of entry in the U.S., the date of his return to Boryslav/Drohobych, would be most welcome. So would more specific information about his business activities in Boryslav or Drohobych.
According to my family’s oral history, David Becher returned from Pennsylvania to Boryslav or Drohobych to introduce the drilling technique in the region and was granted a special pass by representatives of the Kaiser (Boryslav was then part of the Austro-Hungarian Empire ) to travel freely throughout the Empire and be given such aid as he required in his oil business dealings.
The following may be of help in finding material about my great-grandfather: I have documents confirming that David Becher married Chane Rachel Zuckerberger in Boryslav. One of their children, Eisig Isidor Becher(-Zuckerberger), born in 1875, was my grandfather, and he in turn married Hinde Horowitz (or Hinde Dorrewetz) .
If you are able to add to my knowledge of David Becher, especially, and to his life in the oil industry, I would be very grateful.
Thank you in advance for any help you can offer!
Sincerely yours,
Karin Lipson
Klip626@aol.com

I will try to ask some of the people who may know that information. If he was well-known person probably there some information.

Also if you have some exact information, pictures, history notes, etc please prepare them and i will contact you next week through mail, you can send me them.
This will be useful because the exhibition is prepared, so I am gathering information about famous persons of Drohobych region.

Probably you have some more information about the region.

I just found your comment about my great-grand-father, which you wrote on April 16! so sorry for the overwight.

Here is some additional information:

Finally, I found a ships record that confirms that my great-grandfather, David, at age 28 (born circa 1847), was aboard the SS. Pommerania, which landed in New York harbor on June 2, 1875. He is accompanied on the ship’s list by his wife, Chane, age 26, and by a daughter, Rebecda, age 6.

Could this help you find more information about David Becher and hsi role inthe oil industry?

Thank you for any help you can give.